Cathy Stevens
Mount Vernon, WA, United States
Cathy Stevens, owner of Peeps Photography, has earned a reputation for artistry in her lifestyle portraits of children, high school seniors and families. Cathy strives to provide outstanding customer service, quality and creativity for clients from Alaska to California. She has a fun, informal portrait style which allows her clients to relax and enjoy the session. Her sensitive Black & White portraits of artists in their studios have been exhibited in many group art shows and collected by art patrons throughout the Pacific Northwest. 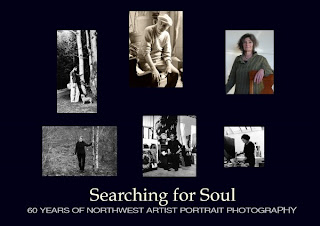 
Maggie Wilder: There’s been a steady stream of visitors here at Gallery Cygnus to see this exhibit, “Searching for Soul”, the portrait work of Mary Randlett and Cathy Stevens. And I’ve noticed that many people have an emotional response upon coming through our door. It’s bigger than any one photograph. I’m not sure what that’s about, but I felt it too, when I walked in the day after Peggy hung this show. What did you feel just now, coming in?

Elizabeth Tapper: In this culture of America, we’re inundated with images of celebrity; people we think we know, but really don’t. It’s all highly manufactured with a consumer in mind. That’s completely absent here. Instead, I feel a presence of human dignity. And also, an intimacy. And, perhaps, a vulnerability. And there seems to be a conversation happening in this very peopled space of your gallery.

MW: We very much wanted to create a multigenerational artist portrait show that began with Mary Randlett’s photographs of Tobey and Graves, Clayton and Barbara James, and create an inclusive lineage of folks who’ve been called to work here in Skagit Valley. Cathy Stevens had documented some of the subsequent generation, and took on even more studio visits to help us produce this show. I am moved by the representation overall of a community that has held me personally, as an artist. There’s a kinship. These people mean something to me. I have heard some of their voices in my studio, and I can hear them now, in this room.

ET: It’s an interesting perspective, this view I have from being eighty. When you get to be an elder, you take time to reflect. You want to see more deeply, beyond the surfaces of things. It is a search for what is held beneath the reflected light.

What’s interesting is not one of these photographs says “this is what an artist looks like.” And that’s how we know that there’s also an artist behind the camera, as well as in front of it. These are not clichés. The photographer is exploring something, something elusive.

MW: Mary Randlett knew her subjects well, yet there is a respectful distance in her photos. No “in your face” close-ups. She does very little manipulation in the darkroom.

Cathy told me that the way she works is to visit her subject in their studio. That invitation into a private space is perhaps what makes for that feeling of intimacy and vulnerability. She spends time with them, and when she sees something that seems at the heart of this person, a gesture, an expression, she asks them to revisit that moment, and that’s when a photograph happens. It’s not a candid shot. And yet something is revealed.

ET: And that’s just the beginning. There’s an artist, there’s a tool, then a subject. But art doesn’t happen until choices are made: why this shot, and not another? When to manipulate the photograph. What’s being revealed in the photograph.

A real artist can take a mundane subject and create an interest in it. But it happens because of their deep curiosity.

MW: I wonder what can be revealed in 1/6oth of a second of reflected light, on a piece of photosensitive paper with not much surface?

ET: Most of the people we meet, we know first face to face. Later we learn more: their interests, ideas, experiences. With artists, it’s often the other way around. In this exhibit, we may know the work first, and now we see the artist’s face. What the photographers have given us is not just a face, but the language of their bodies, and an environment, in many cases their studios. Studios are usually very private spaces.

MW: Someone famously said “a good face has something behind it.” Is there anything about the face of an artist that speaks to us? Or is there something about this particular community of local artists that people are recognizing? Mary Randlett and Cathy Stevens obviously thought there was something worth investigating and recording.

ET: When it comes to making art, it’s not the tool, or the subject, but what the artist does with that tool. What makes it worth viewing is a revitalization of something familiar, something that the soul knows to be true.
Posted by Cathy Stevens at 10:29 AM